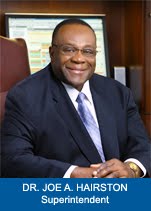 A visionary and progressive leader, Dr. Joe A. Hairston has served since 2000 as Superintendent of Baltimore County Public Schools, the nation's 26th largest school system. Dr. Hairston’s administration is now among the longest in the modern day history of the school system. Dr. Hairston’s results-based leadership has yielded a growing list of achievements including greater student participation and success in Advanced Placement and national renown for the quality of high schools and arts education, use of technology, greater accountability, and resource conservation.

A career rooted in the classroom

A career educator, Dr. Hairston's ascent in education administration began and is rooted in the classroom. Over the years, he has developed and refined strategies that have proven successful in raising student achievement. Dr. Hairston began his career in 1969 as a teacher in Prince George's County. Within two years of entering the classroom, he was appointed department chairperson and five years after that he became administrative assistant to a principal. He was appointed vice principal in 1977 and was named a principal in 1981. While serving as the principal of Crossland High School, from 1982 to 1986, Dr. Hairston developed an organizational, instructional, and marketing model for high school reform that he next employed at Suitland High School. At Suitland, a low-performing school with almost 2,300 students, Dr. Hairston implemented a nationally recognized visionary magnet program, which increased achievement for all students in the school – not just those in the magnet program. His achievements in turning Suitland around were recognized by President Ronald Reagan, Vice President George Bush, and Secretary of Education William J. Bennett and led the school to receive a National Award of Excellence. Many of the elements of Dr. Hairston's formula for student success – developed throughout the 1980s – are echoed in the federal No Child Left Behind Act.

In 1989, Dr. Hairston was named assistant superintendent of Prince George's County Public Schools. Then in 1995, he became the first appointed (rather than elected) superintendent of Clayton County Public Schools in Jonesboro, Georgia. During his tenure in Clayton County, he earned praise for infusing technology into the administration and schools, increasing business partnerships, and developing community advocacy and fiscal support for the school system.A native of Virginia, Dr. Hairston earned a doctorate in education administration from Virginia Tech (1993), a master's degree in administration and physical education from American University (1976), and bachelor's degree in biology and physical science from Maryland State University (now the University of Maryland Eastern Shore) (1969).