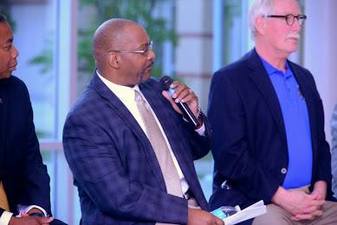 Follow me @drmikerobinson
Dr. Michael Robinson is the Founder and CO-CEO of Forest Of The Rain Productions an Education Affairs Organization.  He is the CO-CEO of Living eFair Housing an organization created to address and discuss housing discrimination. He is also the CEO and Chief Editor of Living Education eMagazine. The online publication focuses on expanding the voices of scholars, researchers, parents and others in the areas of education, housing and academic research.  Dr. Robinson is the host of Parent Talk Live a weekly radio show with emphases on educational topics germane to parents and educators.  He is also the host of Living Education: Re-Defining The Narrative, a weekly live online talk show with conversations on important issues impacting the lives of African Americans.

Dr. Robinson is known as an advocate for social Justice, education, housing, parents and students. He has worked in the areas of community outreach, housing and education for 30 years. He is an authority in community outreach, fair housing, organizational branding, parental engagement, fatherhood issues, at-risk youth and program development.

Dr. Robinson is experienced in addressing fair housing issues via education and outreach, meditation, conciliation, and investigations (testing and surveys).  Dr. Robinson served as the Director of Education and Outreach, then later as the Director of Fair Housing and Tenant Landlord for Baltimore Neighborhoods, Inc. for three years.  Baltimore Neighborhoods, Inc. is one of the nation’s oldest fair housing organizations, it began its services nearly a decade before the 1968 Fair Housing Act.

Dr. Robinson came to understand the importance of parental and family involvement in the lives of students while working as the Center Standards Incentive Officer at the Woodland Job Corps in Laurel, Maryland. He has worked with communities and families throughout Maryland, Missouri, Kentucky, Virginia, and Washington, DC. He continued sharpening his understanding of the importance of parental engagement as the Director for Foster Care in Northern Virginia. He served as the Assistant Director for Community Education with Baltimore City Community College. He has supported the efforts of families to connect with their neighborhood schools as means improve the academic performance of their children. Dr. Robinson served as the Coordinating Supervisor for Parental Engagement and Community Outreach with Prince George's County Public Schools, the 18th largest school system in the Country. Dr. Robinson is the father of two beautiful daughters.

Dr. Robinson earned his Doctorate in Higher Education, with a specialization in Community College Leadership from Morgan State University. Prior to attending Morgan State University, Dr. Robinson earned his Master’s in Public Administration for Western Kentucky University in Bowling Green, Kentucky. He is a graduate of Kentucky State University, where he earned a Bachelor of Science degree in Criminal Justice.  A native of St. Louis, he and his wife Michel have been married for over 25 years, after meeting  on the campus of St. Louis Community College  during a summer break.