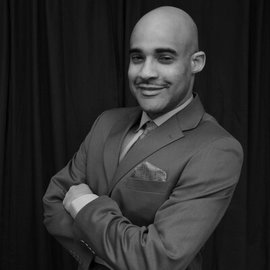 @DoshonFarad
Bio of a Narrative Changer: Mr. Doshon Farad was educated at William Paterson University in Wayne, NJ,  where he majored in Communications and African-American studies. Mr. Farad  has been pursuing journalism since his freshmen year in college in 1996. He has  nearly twenty years of experience in broadcasting, TV and radio. Some of Mr.  Farad's influences include Gil Noble, Dr. Tony Brown, Ed Gordon, Tavis Smiley  and Dr. Michael Eric Dyson.   Farad delves into issues affecting people of African descent across the world. He lectures on a wide range of topics ranging from history to politics to Hip­Hop to  World Affairs and economics to entertainment. And he appears on numerous television and radio programs such as News One Now with Roland Martin, The Michael Imhotep Radio show, Jesse Lee Peterson's Radio Show, NYC's Hot 97's Street Soldiers hosted by Lisa Evers.  He has served as the head columnist and host of the Movement Magazine a national new jersey based publication and web series that discusses literature, current events, and entertainment.

His articles have been featured in print publications such as Experience Reality Magazine, New Black Panther News, the Amsterdam News as well as online sites such as The Grio, and The Black Agenda Report.   He travels across the country covering, moderating, and lecturing on subjects ranging from current events to politics to crime as well as from Hip­Hop to history to entertainment. In the past Mr. Farad co hosted a weekly live streamed internet  radio show called, "FYI: What the Hell is Going On?” a program which discusses  current events and entertainment.

​He also hosted “World Wide”, a public affairs show that airs on the Manhattan Neighborhood Network in New York City.  He recently hosted "Let's Build with Doshon Farad" an internet radio talk show on The Black Talk Radio Network" and now currently co-hosts "Change Makers" on New Jersey's 95.9 FM.  Currently he is a video reporter, writer, and commentator for Your Black World, a site which features black bloggers. Mr. Farad recently worked as a full-time news writer for Arise News a twenty-four hour black owned television news network. And he is also now a contributor for NewsOne.com.

My personal motto "I'm Just A Brother".
​
Q. How is your work changing the narrative?: I am changing the narrative by showing black people correct role in World affairs. And by highlighting our accomplishments and the great ones of our community big and small in the U.S. and across the World.