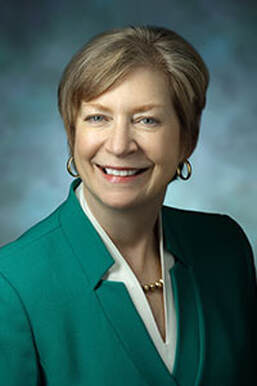 Dr. Hetherington has served as president of HCC since 2007, leading an institution nationally recognized for its strong academic programs and innovative approaches to instruction. Under her leadership, Howard Community College has grown to almost 30,000 credit and noncredit students, a 19.2 percent increase since 2007. Supporting this enrollment growth has resulted in more than $268 million in college facilities construction and improvements, including building renovations, parking garages, a health sciences building, and a science, engineering, and technology building, as well as a mathematics and athletics complex currently in design.

With her student-centered approach to leadership, she has revamped the college strategic planning process, added academic programs in high-demand fields, and focused on increasing degree completion and transfer to four-year colleges and universities. Over the last ten years, the college’s graduation rate increased 35 percent.

Well respected by her peers in higher education, the Association of Community College Trustees (ACCT) named Dr. Hetherington as its recipient of the 2014 Chief Executive Officer Award, which recognizes the outstanding contributions and leadership of a community college president. The Daily Record recognized Dr. Hetherington three times as one of Maryland’s Top 100 Women and named her to the Circle of Excellence. She also was recognized by The Daily Record with its 2018 Influential Marylander Award. In spring 2019, she and the college’s board of education were the recipients of the American Association of Community College’s national Exemplary CEO/Board Award.

During her tenure as president, Howard Community College has achieved recognition as a “Great College to Work For” from The Chronicle of Higher Education for eleven consecutive years. HCC is the only community college in Maryland—and one of only two community colleges in the nation—to have achieved this record status. Equally impressive, HCC has been named a 2019 Malcolm Baldrige National Quality Award winner in the category of education. This award is the nation’s only presidential-level honor for performance excellence in organizations.

Dr. Hetherington maintains strong ties to the community and strives to enhance the college’s partnerships with area businesses, organizations, and nonprofits. She has served on numerous local boards, including the Howard County Economic Development Authority and the Howard County Chamber of Commerce. Dr. Hetherington also serves on the Greater Baltimore Committee advisory committee on education and workforce and the Economic Alliance of Greater Baltimore board of directors.

Nationally, Dr. Hetherington is affiliated with numerous boards, commissions, and committees. She served on the American Association of Community Colleges’ board of directors. Dr. Hetherington is currently a board member for Community Colleges for International Development, the Chair Academy, and the Alliance for Innovation and Transformation. She also serves as a commissioner on the Education Commission of the States.

Prior to her presidency, Dr. Hetherington served HCC as the executive vice president, capital campaign manager, and vice president of student services. Before joining HCC, she held progressively responsible positions at the Community College of Philadelphia, including dean of student systems. She was an adjunct professor at Delaware County Community College in Pennsylvania.