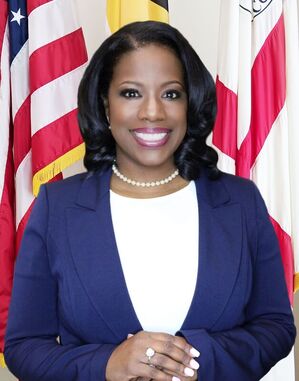 Ms. Braveboy is ushering in significant changes in how individuals and cases are handled to ensure not only that justice is administered in Prince George’s County, but that it is done fairly.
​
During her first-ever State of Justice event, she announced that the County will no longer require cash bail as a requirement for pre-trial release in cases where the person isn’t a danger to society and doesn’t pose a flight risk.  That is a major policy change, which will ensure that individuals who can’t afford bail will not languish in jail.  She has also reorganized her juvenile justice unit and created community partnerships to end the school to prison pipeline, one of her major priorities.  Ms. Braveboy has created a number of new units in her office to better address criminal justice needs.  The Public Integrity Unit focuses on police misconduct, excessive use of force and corruption cases.  The Conviction and Sentencing Integrity Unit, the only one of its kind in the state, reviews cases where there are questions or doubts about a sentence that has been handed down.  In addition, Ms. Braveboy is expanding diversion opportunities.  She has doubled the number of participants in the Back-On-Track program, which focuses on giving first-time felony drug offenders a second chance.  She has also created the Drive Focused, Sober and Safe campaign and increased participation in the monthly Community In The Courthouse sessions.

Prior to being elected as State’s Attorney, Ms. Braveboy served as the Manager of Government Affairs for Children's National Health System.  Ms. Braveboy was also Of Counsel with Gabriel J. Christian and Associates, where she represented clients in criminal and civil matters.  In addition, Ms. Braveboy, for over 17 years, served as General Counsel for the Community Public Awareness Council (C-PAC), a community-based juvenile diversionary program that has successfully diverted over 4,000 students from the criminal justice system.

In 2006, Ms. Braveboy was elected to represent the 25th Legislative District in the Maryland General Assembly.  As a Delegate, Ms. Braveboy was appointed by the Speaker of the House to serve as Chair of the Consumer Protection Subcommittee.  She was elected by her peers to serve as Chair of the Legislative Black Caucus of Maryland, where she guided the 44-member organization on a wide range of policy issues including parity for Historically Black Colleges and Universities, reducing mass incarceration, enhancing tools to prosecute rapists, increasing opportunities for women and minority-owned businesses and reducing health disparities in our State.

Ms. Braveboy graduated from the University of Maryland College Park, where she received her Bachelor of Arts Degree in Government and Politics.  She also received her Juris Doctorate from Howard University School of Law.  Ms. Braveboy is a member of the Sanctuary at Kingdom Square and Sigma Gamma Rho Sorority, Inc.