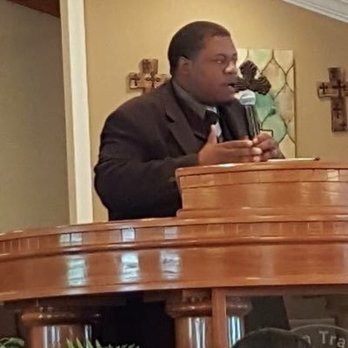 Rev. James Ray Riley was born in Baton Rouge, Louisiana to Rayfield and Rev. Vernita P. Riley. He confessed his sins and received The Lord Jesus Christ into his heart in 1985. Pastor Riley married the love of his life Crystal M. Riley on February 12, 2011. They have there beautiful children Jordan (6) JaMarion (8) and Johnicia (11). Pastor Riley and Lady Crystal will be celebrating 6 years of marriage this coming year.  In September of 2000 Rev. Riley left Baton Rouge to join the United  States Marine Corp. From 2002-2004 Rev. Riley served in Operation Iraqi Freedom and Operation Enduring Freedom in Iraq.

Upon his return from military service, Rev. Riley began to work in several ministries in his home church Star Hill Baptist Church of St. Francisville, Louisiana. Feeling compelled by God to make a new start, in December of 2009 Rev. Riley joined the Mt. Pleasant Baptist Church of Chaneyville, Louisiana were he faithfully served as the Youth and Young Adult Director. Upon the resignation of the churches pastor, Rev. Riley assumed pastoral responsibilities. Under his leadership, Rev. Riley established a youth and young adult bible study class that quickly out grew the classroom. After his work was complete in the Chaneyville community, The Lord saw fit to move him back to Baton Rouge.

In 2011 Dr. Mark A. Litt, Sr. and the Greater New Galilee Baptist Church opened there arms to Rev. Riley and his family. Dr. Litt is the Founder and President of The Glory to Glory Youth and Leadership Conference, Inc. Under the leadership of Pastor Litt, Rev. Riley received his Bachelor and Masters of Theology and Doctorate of Theology from Liberty University and received a Certificate for Church Administration from Howard Divinity School. Rev. Riley was ordained in December of 2013 and operated faithfully as Dr. Litt's Young Adult Director.

Hearing the voice of God speak, The Bethesda Church was birth into the world on May 03, 2015 at 11:00am. This church plant is the product of much prayer, many tears and serves people who many have thrown away and counted out. With a heart of humility, Pastor Riley serves those who are homeless, hospitalized and helpless to bring hope, happiness and wholeness. From this service, God spoke and called Pastor Riley to serve as Senior Pastor of The House of Prayer Baptist Church. A church that is primed for Kingdom Work. On May 15, 2016 at 2:00 pm, Pastor Riley was installed as the second pastor in the history of this awesome church.  Pastor Riley truly believes 1 Corinthians 3:7 KJV "So then neither is he that planteth anything, neither he that watereth; but God that giveth the increase."