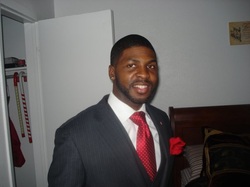 Follow me @thejray5
Joseph Ray earned his B.A. in Organizational Communication from UT-Arlington in December, 2009.  He earned his Texas Teachers Alternative Certification as 4-8 Generalist in July, 2010.  The 4-8 Generalist designation indicates his high qualification in the areas of Science, Math, Social Studies, English and Language/Reading.  Mr. Ray earned his Master’s Degree in Educational Administration in 2013 graduating Magnum Cum Laude (3.83). He is now certified as a principal in both the states of Colorado and Texas. During his college years, Joseph Ray formulated Konan Kleaning Service, where he engaged in contract negation, supervised a crew of nine as well as over saw all account and executives duties. Over the course of one year, Mr. Ray was able to land five commercial contracts which he sometimes cleaned himself during late hours on school nights. Since October, 2010, Joseph Ray has worked for the Fort Worth Independent School District and has been responsible for educating sixth grade students in the area of Science.  Mr. Ray’s at-risk students have improved scores on T.A.K.S. and STAAR exams such that they have improved from 8% passing to 56% passing.

In April, 2012, Joseph Ray founded a Texas nonprofit corporation, N Front of Science, Incorporated.  The goal of the corporation is to identify and select at-risk students who will benefit from tutoring, exposure to college environments, and responsible leadership.  The corporation partners with local colleges to provide on-campus tours, lab facilities and exposure to college environments. Unsatisfied with the results, he went on to found the N Front of Science Preparatory Academy for Young Men; the first private, all male, STEM academy in the DFW area. He is a member of the Arlington/Grand Prairie Alumni Chapter of Kappa Alpha Psi Fraternity, Inc. and is a financial director of the Kappa League program.  Mr. Ray is a mentor in the U-Teach program for inspiring teachers, is active with UTA Mentor Program and with the UTA Volunteer Program.  He participated in the Emmitt J. Conrad Internship program sponsored by Senator Royce West. Joseph Ray lives in Arlington, Texas with his wife, Heather, and their two children.

Q. How is Your Work Changing The Narrative?
My work is changing the narrative because we are replacing all negative statistics with positive statistics. No longer do we have more African American men in jail than in college.  A huge part of my work has come in the form of transforming the mindset of how our students see themselves. When our students change the way they view themselves, they also change their view of education and the opportunities it present. My work is challenging students to pursue careers in the so called "hard" subjects for AA's ie..Science, Technology, Engineering and Math.