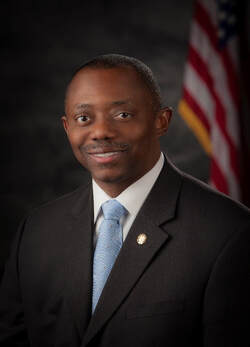 A lifelong educator, Dr. Elie Bracy, III serves as superintendent for Portsmouth Public Schools (PPS). In this role, Bracy is responsible for roughly 14,000 students and 2,100 staff members. Bracy began working for the division in 2015, bringing with him more than 20 years of experience in public education.

Named a 2021 Virginia State Superintendent of the Year as well as the state’s 2020 Region II Superintendent of the Year, Bracy has been lauded for his innovative and forward-thinking leadership, which has brought a sharp increase in school accreditation, expanded classroom opportunities for students throughout the city and increased career and technical education programs that prepare students for industry-level jobs right out of high school. He also helped expand a dual enrollment program called First College, in partnership with Tidewater Community College.

Realizing the critical importance of technology in education, Bracy has led the technological expansion in the division. By the summer of 2020, PPS was a full 1:1 division, with devices for every student to utilize in school and at home.

Bracy believes educating students involves the support of staff, parents, and the community. As such, he established teacher, student, and parent advisory committees. These working groups serve as a forum to share ideas and concerns as well as receive direct counsel from stakeholder groups. In addition, he expanded the division’s Parent and Family Liaison program from a Title I elementary program to all schools in the division. Bracy’s efforts in family engagement have been so well received that in 2017 he was named the State Superintendent of the Year by the Virginia Parent Teacher Association (PTA).

Bracy previously served as Superintendent of Weldon City Public Schools in Weldon, North Carolina. While there, he also received the Regional Superintendent of the Year Award. His professional experience also includes serving as an assistant superintendent for curriculum and instruction, principal, assistant principal and school guidance counselor.

Bracy earned a bachelor’s degree in political science from Kentucky State University, and a master’s degree in public administration and guidance counseling from North Carolina Central University. He also earned a master’s degree in education administration and supervision from North Carolina Agricultural and Technical State University. He later earned a doctorate in educational leadership from Nova Southeastern University.
​
He’s a member of several professional associations, including the Urban Superintendent’s Association of America, the Virginia School Boards Association, The American Association of School Administrators, and the Virginia Association of School Superintendents.  Locally, he is a member of the Portsmouth Kiwanis Club and the Portsmouth Partnership Board.
Bracy and his wife, Kimberly, reside in Portsmouth, and they have three children and one granddaughter.