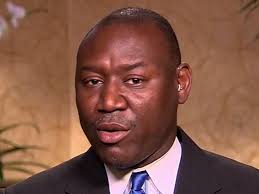 @AttorneyCrump
Living Education eFocus News discussed the lack of criminal convictions in the fatal police-involved shootings of unarmed African Americans, police training, and why he  stays in the fight for justice with Attorney Benjamin L. Crump.

Bio
Distinguished lawyers whose names are on the pages of American History books are not there because of their pedigree, their alma mater, or even their affluence.  It is because of the landmark cases they won and how their success has changed jurisprudence.  Attorney Benjamin Crump and his legal prowess and success have created a significant legal legacy that ensures that the promise found in our nation's constitution is indeed real in every state, municipality and neighborhood.  His legal acumen as both a litigator and advocate has ensured that those most frequently marginalized are protected by their nation’s contract with its constituency.  The conspectus of his constitutional battles at both the local, state and federal levels will be the textbook most frequently referenced by this and future generations of civil rights law and the protection of constitutional freedoms.

Benjamin Crump was nationally recognized in 2014 as a NNPA Newsmaker of the Year, The National Trial Lawyers Top 100 Lawyers and Ebony Magazine’s Power 100 Most Influential African Americans.  He was also bestowed the American Association for Justice Johnny Cochran Award, the Alpha Kappa Alpha Eleanor Roosevelt Medallion for Service,  the NAACP Thurgood Marshall Award and the SCLC Martin Luther King Servant Leader Award.  In 2016, he was designated as an Honorary Fellow by the University of Pennsylvania College of Law.  Attorney Crump serves on the Innocence Project Board of Directors, was the first African American to chair Florida State University College of Law’s Board of Directors, and currently serves as the 73rd President of the National Bar Association.  He has represented and recovered millions of dollars for their clients in some of the most high profile cases in the United States, like Trayvon Martin who was killed in Sanford, Florida by a neighborhood watch volunteer; Michael Brown who was killed by a police officer in Ferguson Missouri; the precedent setting Robbie Tolan U.S. Supreme Court case; and 10 Black women who were the victims in the Holtzclaw Oklahoma City Police rape case in 2015. He also served as Board Chairman of the Legal Services of North Florida. Attorney Crump and his law partner, Daryl Parks, donated $1,000,000.00 to the organization’s Capital Campaign to ensure that poor people would continue to have quality legal representation and access to the courts.

Attorney Crump understands that the practice of law is a privilege that carries with it certain responsibilities and obligations to our society and to our democracy.  He gives freely and unselfishly of his time and legal talent to represent the poor, the powerless, the defenseless and the oppressed among us.  He strives through his work to fulfill the promise of equal justice for all.  He is married to Dr. Genae Angelique Crump and is the proud father of Brooklyn Zeta Crump and legal guardian to Chancellor Isiah Crump and Jemarcus Olajuwon Crump.
​