Using Education to Overcome the Odds 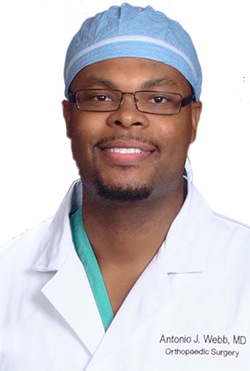 Living Education eFocus News interviewed Dr. Antonio J. Webb, M.D.   on how youth can use education to overcome the odds and become winners in life. Dr. Webb is currently an Orthopedic Surgery Resident at the University of Texas Health Science Center.  He is also the author of “Overcoming the Odds: From war on the streets of Louisiana to the war on terrorism in Iraq, how I successfully overcame the odds.”


BIO
The odds were stacked against Antonio Webb, beginning with his childhood in Shreveport, Louisiana. Friends and family members were serving jail time, or addicted to drugs. Some close friends were even killed amidst the challenges of the neighborhood.

With these influences in his life, it seemed he was destined to turn out the same way. But fate had something else in mind for young Webb. While in high school, he developed an interest in biology and medicine and his grades earned him a spot in a local medical magnet program for disadvantaged students. Inspired by this experience, he began to dream of a career as a doctor, even though no one in his family had completed college, let alone medical school.

Webb realized his best chance for financial help with higher education would come if he served in the military. After 17-year-old Webb graduated high school in the top 5% of his class, his father consented to let him join the U.S. Air Force, in 2001.

While on his 8-year active duty commitment in the Air Force, Webb worked as a medic and simultaneously attended undergrad at the University of Texas at San Antonio, taking classes whenever and wherever he could to compete his degree. 6 1/2 years after first beginning, Webb became the first person in his family to hold a college degree.

He was later deployed north of Baghdad, Iraq, where he served as a combat medic; on a base dubbed “Mortarville” for the frequency of mortar attacks it endured. He treated just over 800 patients during his deployment and earned several medals in the process.

When he left the military in 2009, it was time to pursue his medical training full time, beginning with the Georgetown Experimental Medical Studies Program, which worked to prepare students from disadvantaged backgrounds for success in medical school and beyond. From there, he was accepted into the renowned Georgetown University School of Medicine, and he says he considers the day he was accepted the most unforgettable moment of his life thus far.

His studies covered medicine as well as medical research and he earned honors in the fields of Renal, Pediatrics, Internal Medicine, Surgery, Psychiatry and Critical Care ICU, leading to his Doctorate of Medicine degree in 2014.

Today, Dr. Antonio Webb is completing his residency at the University of Texas, San Antonio, specializing in Orthopedic Surgery. But that isn’t enough for the tireless and disciplined doctor. He’s putting the finishing touches on his first book, his life story, aptly titled Overcoming the Odds, and is frequently sought after for inspirational speaking engagements.