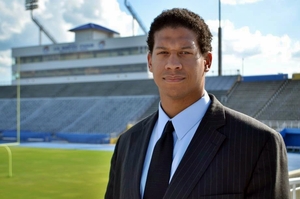 Follow me @Jag_Me_Out
Living Education eFocus News spoke with Dr. William Broussard, Director of Athletics
Southern University about his perspective on the issue of paying college athletes to play sports. Dr. Broussard, recently served as athletics director at Centenary College in Shreveport and cited NCAA rules compliance, academic performance and “institutional advancement” as areas he deemed vital to the success of the athletics department during his tenure. Dr. Broussard is a 2000 graduate of the Louisiana Scholars’ College at Northwestern State University and earned a master’s and doctorate in Rhetoric, Composition, and the Teaching of the English Language in 2007 from the University of Arizona. As an undergraduate, Broussard was a varsity letter winner for NSU’s Division I football team from 1997-2000. A two-time All-American center, Broussard was a member of the All-Conference, All-Louisiana, All-District teams and received several notable awards for his success both in the classroom and on the playing field.


To hear the entire interview click the link below: